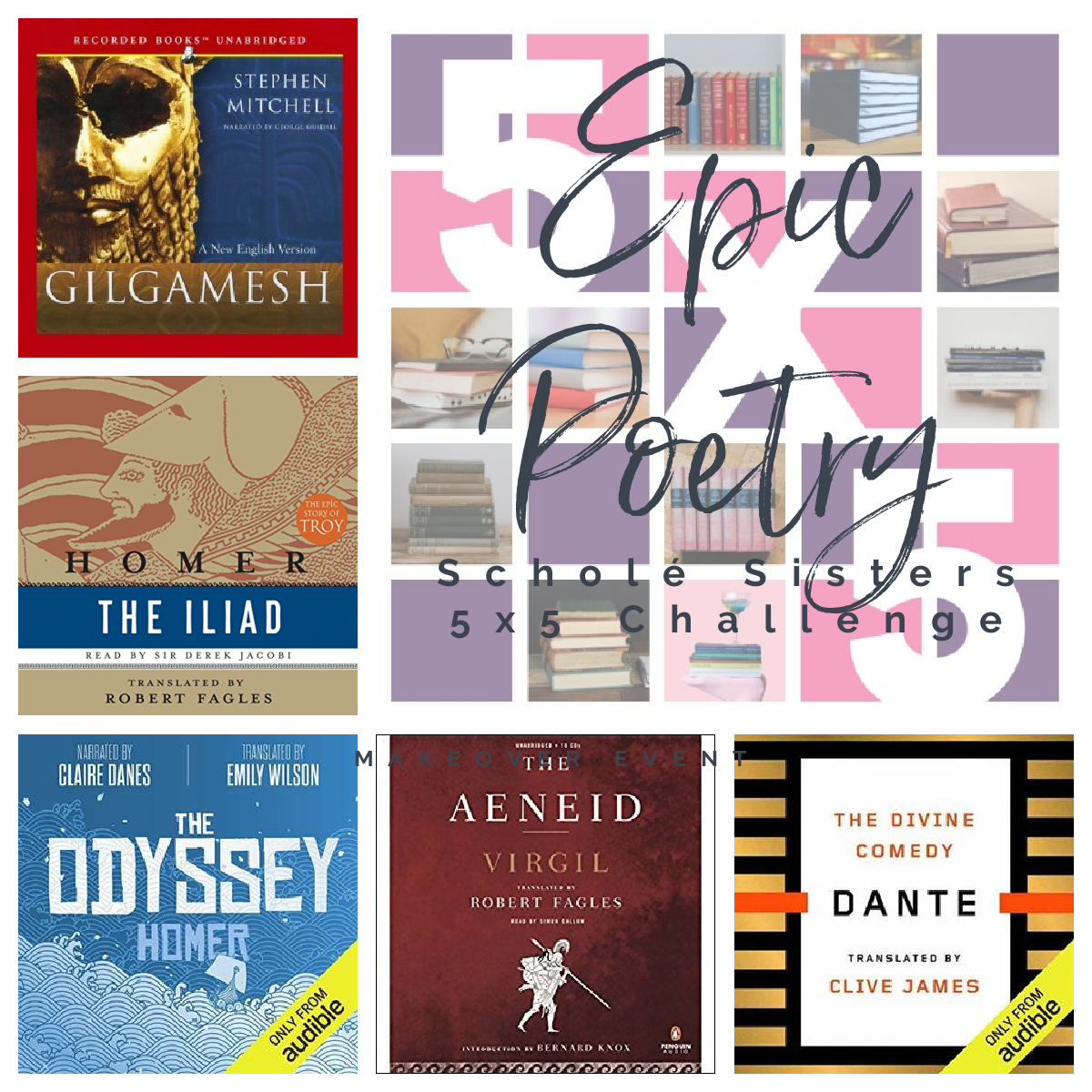 So far in 2021, I’ve been steeping myself in Ancient thought. I never really would have guessed that I would choose to power myself through Epic Poetry … and love it.

There have been moments. Mostly during my first listen to the Aeneid when I wondered, “What have I gotten myself into?!” But I will admit to some relief during Gilgamesh that I was listening to it with ear buds and no teens were overhearing the matter of fact seduction of Enkindu.

I decided I wanted to do Epic Poetry as audio because 1) I knew I could at the very least get a scope and a basic idea while walking and 2) I wasn’t sure I would have the same success with eye-reading.

A year ago I listened to and read Paradise Lost at the same time which was a very good exercise. It forced me to not delve into all of the allusions, kept me going, but forced me to pay attention. Later in the year when the House of Humane Letters was doing their read-alongs, I was amazed at how much better I understood on the second read. I’m sure subsequent reads will also improve comprehension.

Hoping for that kind of results here, too.

So, this 5×5 Category is something of a reconnaissance mission for me. Scout out the land, figure out the main players, get an introduction and keep moving forward.

I started the year with Stephen Mitchell’s “version” of Gilgamesh. This is a version and not a translation because 1) he didn’t translate it and 2) we don’t have it complete. He took scholarly translations, wrote a prose version, and then wrote a poem. I was surprised that Gilgamesh was so … earthy (for example the aforementioned seduction scene), but also that it was short. Following the poem, itself, was an explanation and essay about the version. That was fascinating, and after completing it, I listened to the epic again and it helped to have that introductory background. I do recommend listening in this way, just … have those ear buds!

Next up, I listened to Homer’s Iliad. Sadly, this version narrated by Sir Jacobi is no longer available on Audible (perhaps it is elsewhere?). It was wonderful. I’ve later learned that it may be abridged? I’m not sure.

The Iliad is the only epic I didn’t listen to any commentary on, and I feel that lack. I may go back and do so again, but the story was relatively easy to follow.

Homer’s Odyssey held some surprises for me. I had no idea that all of Odysseus’ adventures at sea were essentially his telling his story. That added a level of eyebrow raising for me. When I first began, I was shocked by the 3 hours of background information that the translator, Emily Wilson, included. I strongly considered skipping it. After listening, I was glad that I had. While I didn’t always like her explanation for the reasons for the choices she made, at least I knew them and understood where she was coming from as a translator. I really enjoyed Claire Danes’ reading, as well. Some people have not, your mileage may vary.

Oh, Virgil’s Aeneid. Let’s just say that the best thing I could do for my listening to the Aeneid was to listen to Dr. Elizabeth Vandiver’s Great Course on the same. A year ago, mostly as a family, we listened to her course on Classical Mythology (fabulous) through the library. (There were some lectures, particularly Aphrodite, that are not for young ears, not graphic but matter of fact). Anyway, I had spoken with my Pastor and his wife about what we were reading and listening to and they, too, had enjoyed Dr. Vandiver’s courses in the past.

I listened to The Aeneid, and I will say after Book 4 and the whole Dido fiasco, I wasn’t really sympathetic to Aeneas and kinda just wanted the epic to end. I dreaded listening, but forced myself to keep on. When I finished and bemoaned this to the Literary Life Podcast Discussion Group – I was asking for help because I knew that the Aeneid has stood the test of time for a reason … so something must have been wrong with the reader.

Someone in that group suggested the Vandiver course, I used a credit and interspersed the lectures with a *second* listen of the poem, and it made a huge difference. I maybe am still not an Aeneas fan, but at least I could see better what was going on and why he made the decisions he made. The second reading was a success.

I knew I had to like Virgil better because Dante was coming:

So far, and I’m not far, I’m very much enjoying the Divine Comedy. I am thankful I worked through the issues I had with the Aeneid because understanding Aeneas’ trip through hell is casting a vision for Dante’s. I’ve learned my lesson, though, and I got myself a guide. I purchased all three of Dr Anthony Esolen’s lectures on the Inferno, Purgatory, and Paradise. Again, so far, these are just spectacular. As of this writing I’ve listened to 12 Cantos and 3 lectures. Dr Esolen recommends reading (I’m listening) to the assigned Cantos and then the lectures. I’m thinking perhaps Canto-Lecture-Canto would be excellent.

I’ve found the Clive James translation to be quite approachable and not too fussy. I’m curious about both Sayers’ and Esolen’s translations as well.

I said I was steeping myself in Ancients (I do know that Dante is not an ancient, but he is definitely tying to that path) and I would be remiss to not include some other readings to this. Besides the Epics and guides above, including Dr Vandiver’s Mythology course, I’ve also been reading the ancients portion of The Great Tradition, about education. The ancients believed in educating toward virtue and these epics show the same sensibilities and ideals. They give the ideas a place to work out and illustrate.

Finally, I highly recommend constantly reading The Bible, especially the book of Job and other Old Testament wisdom literature (but really: Job) alongside these Epics. We forget, I think, that scripture is ancient. And the Wisdom literature poetic. It was written before or concurrent with these other tales. Pastor Kessler gave a sermon on Job 3 that simply blew me away, showing how literary Job is. Being sure to be grounded in scripture helps us to put the others in proper perspective.

The Scholé Sisters’ 5×5 challenge gave me both the reason and encouragement to pull together these books and to approach them. I am unlikely to have ever made such a concerted effort without the challenge.