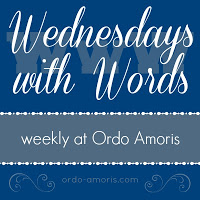 I’ve been reading through Ravi Jain and Kevin Clark’s new book The Liberal Arts Tradition while sitting at basketball practices these last couple of months.  I am enjoying it quite a bit – especially the parts I understand well which makes me more comfortable with the parts I *don’t* quite get.  I already quoted it once, early in January.


My favorite idea from the book so far is “… the study of mathematics ought to strike a balance between wonder, work, wisdom, and worship.” (pg 52) Frankly, I think this paradigm could be used for all of the disciplines of the Trivium and Quadrivium.

Today, I read a passage that I thought would speak strongly to Mystie and her word of the year – habitus, so I had to quote it for her:

To understand the central emphasis that ancient thought attached to these preconditioned assumptions inherited through piety to tradition, we need look no further than Aristotle’s explanation of the subject.  Moral philosophy was not, according to Aristotle, a speculative philosophy like physics but instead a practical one.  This does not mean that moral philosophy graduates will have lucrative job opportunities.  By practical Aristotle meant that moral philosophy was connected to and depended upon practice. For this reason Plato and Aristotle would not want their students to study this subject until late in the curriculum.  They believed that their students had to acquire a substantial foundation in practice, living out a pious life with well-ordered habits before they would be able to reason about these most human of sciences. Aristotle writes in Book II, Chapter 1 of the Nicomachean Ethics, “moral virtue comes about as a result of habit, whence also its name (ethike) is one that is formed by a slight variation from the word ethos (habit).”” He goes on, “It makes no small difference, then, whether we form habits of one kind or of another from our very youth; it makes a very great difference, or rather all the difference.” We can see clearly how this core of moral philosophy depends on a common life passed down through generations. It is for this reason that the years of foundation in piety, gymnastic, and music would be so critical to properly forming the communal assumptions of students.  The culture is as much of a teacher as the curriculum. (pg 108, italics theirs; underlining mine)

Linked to Wednesdays with Words at Ordo-Amoris. Join us with a quote from your current read!