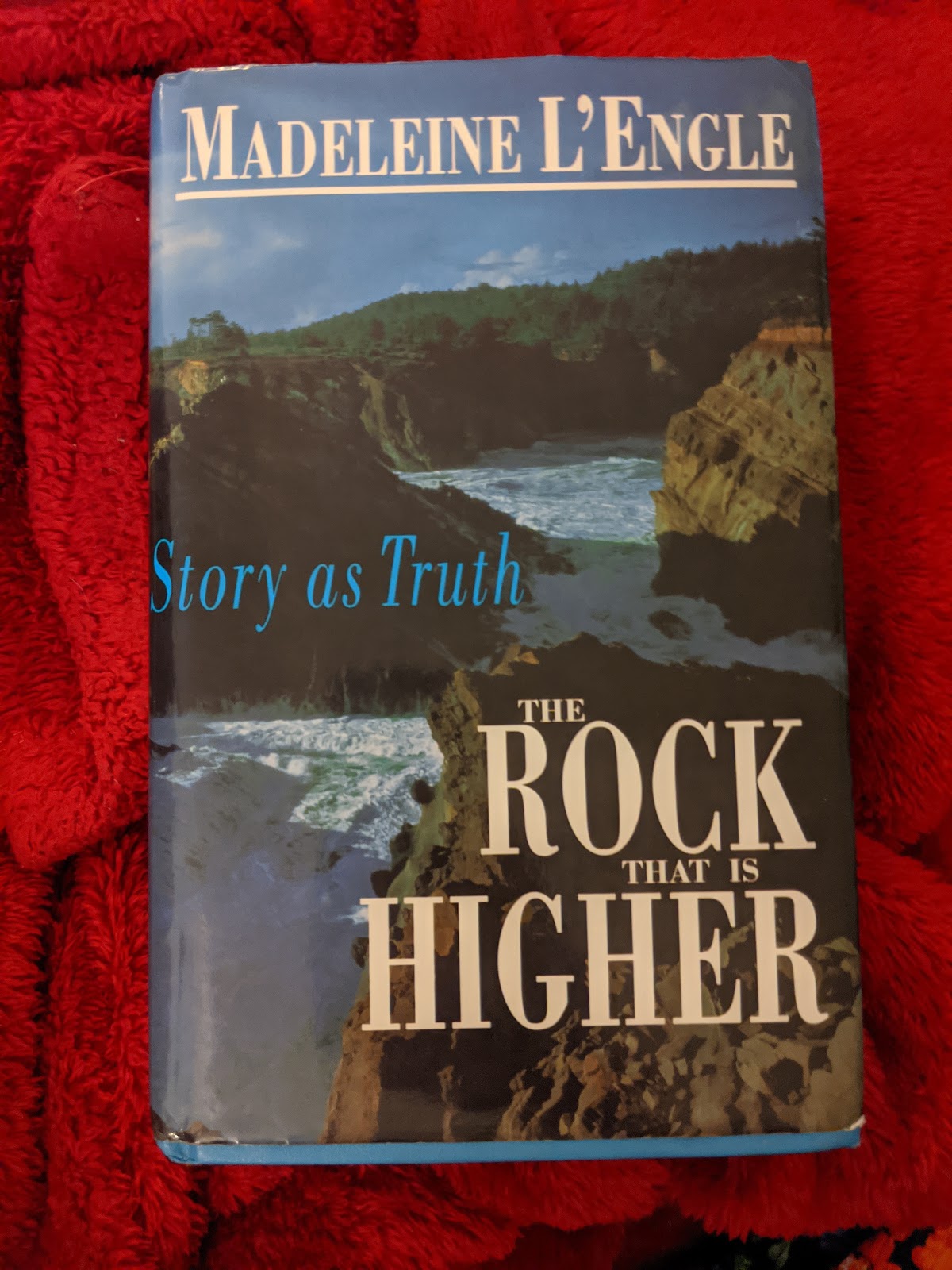 The Rock That Is Higher: Story as Truth by Madeleine L’Engle
My rating: 4 of 5 stars

It was a wonderful choice. Considering story – and true story – in to the Gospel, King David, and interwoven with her own life events was a beautiful way to study the incarnation and Resurrection.

L’Engle and I have theological disagreements, but she always makes me think and her perspective helps me to understand others with whom I may disagree in specifics but not essentials.

Her long career as a storyteller makes her eminently qualified to contemplate Story as Truth (and I compare with Mattie Ross in True Grit who calls lying “stories” – an all to frequent mischaracterization). I’ve been tracking what she calls chronos/kairos through other books – Pieper Leisure the Basis of Culture and Makoto Fujimura’s Refractions. Her final chapters – Creative Act, Redemptive Act, and Resurrection were so encouraging and perfect during this past Holy Week. She talks about Myth and Fairy Tales in ways confirm much I read from Angelina Stanford.

“Story makes us more human, and until we become fully human we will not be ready for home.” p38

“This is because Scripture is true. Truth is deeper and wider and much more demanding than many people would like, but Jesus promised that it would set us free.” p 49

“It is, I suspect, fear of story, fear of imagination, fear of the unexplainable. The less vocabulary we have, the more limited our words, the more frightening the imagination becomes.” p 102

He grinned. … “You’re much better when you don’t think.”

And that is true. It doesn’t mean that I must never think. It doesn’t mean that he hadn’t been training me [to co-lead studies] for a good many years. It doesn’tm ean that I didn’t have a full barrel to draw from. It does mean that the creative actions do not come from the cognitive part of the brain alone, but from a much larger area. When I write, I realized, I do not think. I write. If I think when I am writing, it doesn’t work. I can think before I write; I can think after I write, but when I am actually writing, what I do is write. This is always the instruction I give at writers’ workshops: “Don’t think. Write.” And I put a time limit to the assignments. “You may not work on this for more than an hour. If you’re not finished at the end of an hour, that’s all right. Stop.” It’s a lot easier to write without thinking if there’s a time limit. p 144

“Many of the symbols which are now purported to be New Age, or, even worse, signs of devil worship, are Christian symbols. Indeed they may be misused and distorted by groups which are not Christian (a black mass is a blasphemous distortion of the Christian Eucharist), but that does not mean we need to toss them out and hand them over to the enemy! Give up the rainbow as a glorious sign of God’s covenant with his people? Never! Give up the crescent moon and the stars and call them symbols of S–n rather than visible signs of the glory of God’s creation? Never! The enemy can’t have them unless we weakly and thoughtlessly relinquish our very own heritage.” pg 185

“Too much Christian art relies so heavily on being Christian that the artist forgets that it also must be good art.” pg 200

“… the people I know, in literature and in life, whose chief concern is fulfilling themselves, are always empty.” p 202

“In the fairy tale we find hope of interrelatedness, and sometimes this hope comes because fairy tales deal forthrightly with brokenness. … In fairy tales, and in life, there is risk–risk of failure, of horror, of death. But there is no despair. Rather, there is an unspoken affirmation of the ultimate happy ending.” p 225-226

Once there was a man who was a Namer. That is what he was called by God to be, and to do. Out of the earth,in the days of the beginnings, the Lord God formed every beast of the field and every fowl of the air and brought them to Adam to see what he would name them: and whatever Adam called every living creature, that was its name.

Adam’s vocation as a son was to be a Namer; that was how he was to co-create with the Maker of the Universe. If you name somebody or something, you discover that the act of Naming is very closely connected with the act of loving, and hating is involved with unNaming–taking a person’s name away causing anyone to be an anonymous digit, annihilating the spirit.

When we are unNamed, we are broken; all around us we see fragmented, mutilated people. And the world offers little help for healing, for knitting up the “raveled sleeve of care.” p 229-230

“And is the importunate widow a witch or a wise woman? It all depends. Witches do not have either humility or a sense of humor; wise women can laugh.” pg 247

“We are not privileged because we deserve to be. Privilege accepted should mean responsibility accepted.” pg 253

“Meditation is the practise of death and resurrection.” pg 263

“But the beast and the princess and the journey [of fairy tale] are not without us, but within us, and we ourselves are the kingdom over which they are now to rule.” pg 263

“People who try to sell us cheap grace equate integrity with self-indulgence, freedom with anarchy, liberation with chaos. It doesn’t work. Only discipline and obedience to the strict law of love allow us to be free. It is only the daily discipline of work at my desk which frees a book to be bore. It is only the discipline of daily prayer which allows the freedom of meditation and contemplation. A river isn’t a river when it overflows it banks. The stars would be raging, flaming destruction if they had not been set in their beautiful courses. So with grief; each day of our lives is preparation for grief, preparation for living in Jesus so he may live in us.” pg 273

She ends with He is risen indeed! (italics hers, pg 296) which was perfect to finish with yesteray.

May the Lord help us to understand the many facets of story.

View all my reviews